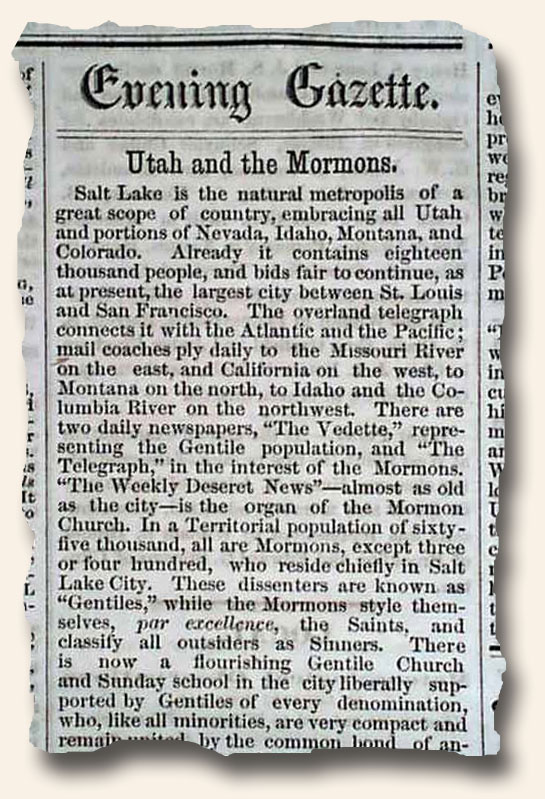 Today I traveled to Worcester, Massachusetts, by the way of the Worcester Evening Gazette dated June 20, 1866 [1]. There I found a very interesting article titled “Utah and the Mormons.”  The article is over a full column in length and provides great details of the life-styles of the Mormon life, including the pros and cons of polygamy; how some of the wives get along and where others do not; a polygamist that needs to do all of his own cooking, cleaning, washing and even sleeps on the floor because his wives don’t get alone.

Also mentioned is a description of Brigham Young, “…He is six feet high, portly, weighing about two hundred, in his sixty-fifth year, and wonderfully preserved… His face is fresh and unwrinkled, his step agile and elastic, his curling auburn hair and whiskers untinged with gray. He has grayish-blue, secretive eyes, eagle nose, and a mouth that shuts like a vice, indicating tremendous firmness. His manner is cold and egotistical. He uses neither tea nor coffee, spirits nor tobacco, speaks ungrammatically, is very rich and universally popular among the saints…” and also states “… Brigham is the favorite speaker, though he does not preach more than once a month. His sermons which I heard were very incoherent and illiterate…”.

An interesting life? You make that call!