Cheating in baseball may be as old as the the sport itself, but it was most notably brought to national attention with the infamous “Black Sox” scandal of 1919, when several players of the Chicago White Sox were 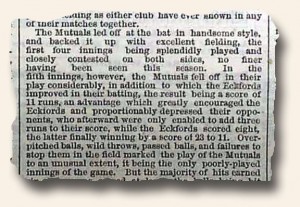 [1]accused of throwing the World Series that year for financial gain.

As newspaper report from shortly after the end of the Civil War gives evidence that it happened much earlier as well. The “New York Times” issue of Sept. 29, 1865 [2] reports on a game between the Mutuals and Eckford teams, ultimately won by the latter with a score of 23-11. Excellence in play was reported with: “…Some of the fly tips taken by Mills surpassed, anything we ever saw in that line of business, while their pitching came nearer to the Creighton mark in accuracy of delivery than any we have seen since his death…”. But records show that several Mutual players were later charged for accepting money to deliberately toss this game (see this hyperlink [3] for the details). Ironically the summary mentions the poor play of the Mutuals marked by “…over-pitched balls, wild throws, passed balls, and failures to stop them…”. Interesting evidence that all was “not well” with the game.

Although the 1919 World Series remains prominent in sports history, this obscure game from 54 years earlier gives evidence to a a rather lengthy history of cheating in baseball.