[1]I remember the first time I held an authentic Civil War era newspaper [2] and was struck by the concept of holding history in my hands. As I read through the detailed battle reports, raw emotion welled up within me as I pondered the possibility of a loved one’s tears falling upon the very newspaper I was holding – as he/she discovered the name of a close relative… even a spouse listed among those killed in battle. As I continued to peruse the paper, the prevalence of ads, birth and wedding announcements, local news reports, etc. communicated a truth that hit me like a ton of bricks: Despite the carnage of war, and the tears of many who had just learned of the loss of someone they loved, life continued to move forward. Anyone who has lost a dear friend or family member knows the emotion: “Hey world – What are you doing? STOP! Don’t you know what’s just happened?” But the train of time rushes forward – ignoring our desperate cry for just a few more minutes…

At this point I took a breath – carefully closed the newspaper, and returned to the present – convinced I had discovered the greatest hobby of them all; one that enables anyone who would dare, to go where Orson Wells, Jack Finney, and others could only dream of going: back in time.

Like many people I’m sure, I have over the years fantasized many times about being able to go back in time. I realize now that this hobby has enabled me to get just a glimmer of that feeling inside, as I hold such old papers, reading the words and seeing the engravings and old photos. Touching the history in such a physical, tangible way evokes a feeling as close to time travel as we can probably ever come…and is a unique 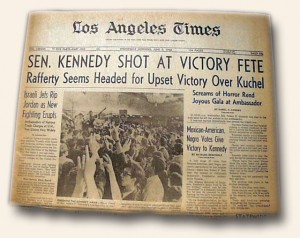 [3]experience utterly lacking in the high school history textbooks I originally studied, or merely looking at images on a computer monitor these days. -Actapublicurist

Yet another, upon discovering the Bobby Kennedy Assassination Report [4] issue shown in the image wrote (in part):

I will never sell this newspaper…  I will be 60 in November and lived in Brooklyn when Senator Kennedy was killed.  I still shed tears when I think about it all these years later.  He left nine children (and a tenth on the way) and a wonderful wife, and we will never know what a difference this magnificent man with a huge heart would have made in the White House.  I grieve for him as if he was close friend.  I will treasure this newspaper and others in my ample collection of the RFK assassination.

What an incredible hobby!