[1]In the world of collectables, early newspapers [2] by no means rank among the most well-known of hobbies. In fact most would be surprised that it even is a hobby.  Who knows anyone who collects early newspapers?

That was exactly my thought nearly 40 years ago. Having been a coin collector since I was a kid, I knew that hobby well. I knew it well enough to recognize that no bargains could be had for the truly rare coins. Coin collecting was, and is, a well exploited hobby. The number of serious collectors must run in the hundreds of thousands with a proportionate number of dealers who make a living selling coins. So as a youngster with only grass-cutting money in my pocket, it didn’t take long to become frustrated when trying to find the last few desirable coins to fill out a set. I simply could not afford them. Everyone knew they were rare, and with more people wanting them than inventory allowed, prices were beyond my reach.

I liked collecting and I wanted a hobby that dealt with history. Holding a coin minted during the time when Lincoln was President, or when Indian battles were still raging on the Plains, intrigued me. I felt like I was touching history. But I needed a collectable that was yet to be exploited. One which few people were involved in.  More importantly, one where I could hope to amass a reasonably nice collection without breaking the bank. 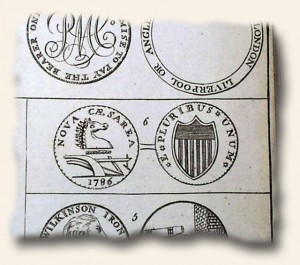 [3]So it was by accident that while browsing through a local flea market that I came across a Philadelphia newspaper [2] from 1846. I was intrigued, not only by the price–$3—but by what I would get. Quickly my mind ran through the host of various coins from 1846 which would require more than ten times the price tag, and what do you get but a hunk of medal with a date & an image of a dead President? A coin could be fully examined in seconds. But this 1846 newspaper would take half an hour to absorb.  So $3 exchanged hands and the newspaper was mine.

Handling this newspaper was better than touching history. Yes, someone in 1846 held this newspaper in their hands, just like coins of the era, but this collectable actually CONTAINED history. News of the day, including events of the Mexican-American War, were within its four pages. Political reports from the term of James K. Polk were scattered throughout. Even the advertisements were fascinating.

I was hooked. The coin collection went on a shelf and I pursued whatever old newspaper [2] I could find. It didn’t take long to discover a whole new world of collectables. Better yet, because so few people were collecting old newspapers prices seemed such a bargain compared to what coins or stamps or any other collectable with similar rarity would cost. I was convinced I got in on the ground floor.

As the years passed my hobby turned into a business catering to a niche market. At best I would suspect there are less than 2000 serious collectors of rare newspapers [2]. Compare that number to the world of stamps, coins, books, or autographs, which hundreds of thousands consider their hobby. [4]A hobby still yet to be discovered by the collecting world, prices remain attractive for the most modest of budgets. Consider that a genuine New York Times in very nice condition from 1863 with front page Civil War reports sells for less than $30. Or consider that a genuine London Gazette from 1680—a 330+ year old newspaper [2]—is available for under $50. Of course content certainly drives interest and price so a newspaper reporting the Battle of Gettysburg can exceed $500, while the same in a Confederate title (much more rare) could be triple the price. But still, genuine issues covering the War of 1812 sell for $25; newspapers with Indian battles are under $35; issues with baseball reports from the 1880‘s can be had for $25; newspapers from during the administration of George Washington for $45. Is there a hobby where genuine items of comparable vintage are at comparable prices? Certainly not.

Rare newspaper [2] collecting is a fascinating world which awaits any historical hobbyist. Whatever event or era in history intrigues, newspapers covered those events.  From the Great Plague of London in 1666, to reports of pirates Blackbeard and Capt. Kidd, to the French & Indian War, the Revolutionary War, the Lewis & Clark Expedition, the Texas War for Independence, every presidential election & inauguration (and death), the outlaws of the West—you name it. Newspapers exist which document those occurrences and every other transforming event in American & world history.

Don’t just touch history with your hobby. Read history from the very day it was reported. You, too, will be hooked on a hobby you never knew existed.

When I first discovered a Tim Hughes Rare Newspapers advertisement in 1987, it was in a coin collecting newspaper.

I recently came across about 4 illustrated prints published by the Illustrator News-March 12, 1853. I would like to find some info on the Illustrator W. R. Miller or Millen Del. I’m not sure about the Del or it could be DeS? Could you help me in anyway? THANKS