For likely a multitude of reasons, interest in World War II [1] newspapers ranks far higher than in the Korean War [2], World War I [3], or the Spanish-American War [4].  It may be a generational thing, as most collectors today are children of World War II [1] veterans and likely heard stories of the war first-hand, or found [5]newspapers in their parents attics which sparked an interest. One could debate a number of other possible reasons why other wars lack the intrigue found in that fought by the “greatest generation”.

Headline collecting has always been a focus for this hobby, and as any collector knows, bold, banner headlines did not become commonplace until late in the 19th century. With the increasing competitiveness of daily newspapers across the country–Hearst [6], Pulitzer [7] & others rising to prominence–flashier front pages were needed to draw attention at the corner news stand. It’s a shame there is not more interest in the Spanish-American War [4] and World War I [3] as both events resulted in some huge, dramatic, & very displayable headlines.

Because there are a plethora of newspapers from the WWII [1] era available, collectors have become very discriminating in what they collect.  Only the “best of the best [8]” will do, meaning just the major events and only those with huge and displayable headlines. If there is a “top 6” list of sought-after events, our experience is they would be: 1) attack on Pearl Harbor [9]; 2) the D-Day [10] invasion; 3) death of Hitler [11]; 4) end of the war in Europe; 5) dropping of the atomic bomb [12]; 6) end of the war in the Pacific [13]. One could add any number of other battle reports such as Midway [14], battle of the Bulge [15], fall of Italy, Iwo Jima [16], battle for Berlin [17], and so much more. And we could step back before American involvement in the war and add Hitler’s [11] invasion of Poland [18] and the battle of Britain.
The bigger the headline the better. With some newspapers the entire front page was taken up with a headline and a related graphic. The U.S. flag was a common patriotic device. Tabloid-size newspapers [19] commonly had the front page entirely taken up with a singular headline and tend to be better for display given their smaller size. 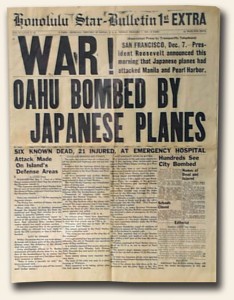 [20]And not just American newspapers draw interest. German newspapers hold a special intrigue, but the language barrier is a problem for many. But the British Channel Islands [21], located in the English Channel between England & France, were occupied by the Nazi [11] during the war so their reports were very pro-Nazi [22] while printed in the English language (ex., Guernsey Island [23]). And the military newspaper “Stars and Stripes [24]“, while certainly being American, was published at various locations in Europe and the Pacific. Collectors have a special interest in finding World War II [1] events in the official newspapers of the American military forces. Plus there were a multitude of “camp” newspapers, amateur-looking newspapers printed on a mimeograph machine for consumption limited to a military base, and typically printed is very small quantities. Their rarity is not truly appreciated by many.

For obvious reasons, there is also a high degree of collectible interest from those wishing to make sure certain aspects of history are not forgotten. The Holocaust [25], and the Nazi propaganda [26] used to provide a rationale for eliminating the Jewish people, is well documented in newspapers from the era. In addition to the Holocaust and its atrocities [25], issues providing context through reporting other pre-war events [27] such as the Great Depression, fascism, and increased militarism, are also desirable.

True to any collectable field, newspaper collectors are always on the lookout for an issue better than what they have, and collection upgrades are constant. Finding that special, rare, unusual or fascinating headline is what makes the hobby fun. Will interest in the Korean War [2] and the Vietnam War [28] gain more interest in future years? Perhaps so. With interest currently low and availability and prices very attractive, it might be a good time to explore.

World War II is pretty popular for very good reasons. How often can one side beat people the likes of Hitler, Mussolini and Hirohito? The sheer patriotism shown by large numbers of people enlisting after Pearl Harbor was impressive (and pretty hard to ever duplicate).

Interest in the Korean War will really increase if something again happens in that region. Kim Jong-un seems to be an unstable leader in a very unusual country and anything can happen there….just my opinion.

While I only started collecting newspapers in 2000, my interest in collecting WW2 newspapers began only in 2009 when I got a hold of the atomic bombing of Hiroshima headlines from both The Miami Herald and Miami Daily News (along with an extra Miami Daily News headline with the discovery of Hitler’s body by the Soviets). Since then, I have gathered 14 atomic bomb newspapers from both Hiroshima and Nagasaki attacks (and counting):

I guess it’s the way the headlines and the articles were written that piqued my interest in particularly collecting them. I can only imagine how the general public reacted upon reading that this new bomb is “2,000 times more powerful” than the previous record holder (RAF’s “Grand Slam” bomb); and how President Truman threatens the Empire of Japan of a “rain of ruin from the air” if they don’t surrender; or how this weapon “could end civilization as we know it.” The 1st publication of the mushroom clouds from the bombings days later made it clear to the public that these weapons of great devastation are for real and not a hoax or propaganda.

With the invention of a weapon that could annihilate an entire city, the speculations on what more could this weapon do probably made both writers and readers excited and concerned. To the casual reader, a single bomb that packs a wallop equivalent to “20,000 tons of TNT” is definitely unfathomable!

Clearly, these historic headlines have “shock value” that reflected the sentiments of that period at the dawn of the atomic age.

Since then, the world was never the same.