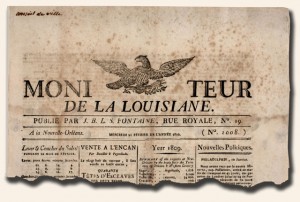 [1]In celebration of its 20oth anniversary the American Antiquarian Society published a beautiful  exhibition catalog titled “In Pursuit Of A Vision – Two Centuries of Collecting at the American Antiquarian Society”. Featured are a fascinating array of books, documents, maps & other paper ephemera, as well as several very rare & unusual newspapers we felt worthy of sharing with our collectors (with permission from the A.A.S.).

The Moniteur de la Louisiane, established in 1794 by Louis Duclot, was the first newspaper published in Louisiana. Because so few early issues have survived, its history is difficult to piece together. The earliest known issue — since lost in a fire but preserved in facsimile — was dated August 25, 1794; all other extant issues are from the 1800s. Although founded when Louisiana was under Spanish control, the Moniteur was published primarily in French, the language of Louisiana’s majority population. Over time the newspaper grew in size from octavo to quarto to folio, and it also change publishers. This 1810 issue lists Jean Baptiste Le Seur Fontaine as publisher, A role he had assumed by 1803 and perhaps as early as 1797. Publication apparently ceased in 1814. When Fontaine died that year, he bequeathed to the city of New Orleans his personal file of the Moniteur.

This is one of two issues of the Moniteur sent to AAS by Edward Larocque Tinker as part of his very substantial gift of early Louisiana newspapers and periodicals.