As newspaper collectors we relish the opportunity to find newspaper accounts of the intriguing moments in American–if not world–history.
But many events simply did not make it to print.
An account of the pealing of the Liberty Bell in 1776, a detailed account of Washington’s crossing of the Delaware, Nathan Hale’s boast ‘I only regret I have but one life to lose for my country’, and Patrick Henry’s bold pronouncement ‘Give me liberty or give me death!’ are but a few.
Accounts of Paul Revere’s midnight ride rank among them. In our 45 years in the hobby we can recall only two newspapers having but a very brief reference to the ride. It was not until Longfellow’s poem ‘Paul Revere’s Ride’, written in 1860, did the world become familiar with the daring and patriotic mission.
We recently discovered a fascinating nugget on Revere’s ride.
A 1795 issue of the Boston newspaper Columbian Centinel (December 5, 1795) [1] has a supportive letter from when Paul Revere was running for the vacated post of Town Treasurer. The writer makes rather derailed reference to the event in 1775, far more detailed than any account previously found despite being 20 years after it happened. See the photo for the full report.
Such little gems, typically buried inconspicuously among the political reports, advertisements, and varied notices of the day, are what thrill those in the search of notable events in history. 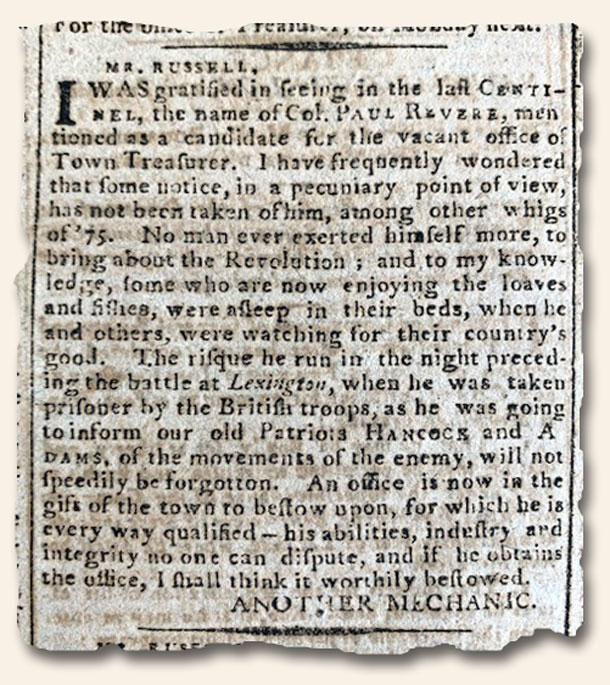 Hello, As someone who is fairly knowledgeable on the Liberty Bell’s history, I can tell you that you will probably not find any reference to the Liberty Bell ringing in July of 1776. You might find reference to the bells ringing throughout the City of Philadelphia on July 8, 1776, but not the Liberty Bell per se. The Bell itself did not become recognized as something that might be connected to Independence until sometime in the 1820s. Probably 1828 when the new steeple was erected on Independence Hall. Even then, no one called it the Liberty Bell. Most newspapers would have referred to it as either the Old State House Bell, or the Independence Bell. It’s not until the mid-1830s that the term “Liberty Bell” is coined by abolitionists who were just beginning to adopt the Bell to their cause.

Thanks for the input. It’s greatly apprciated.