One of the advantages of reading a newspaper with fascinating reports from long ago is the ability to investigate and see how the “event” came to a conclusion. 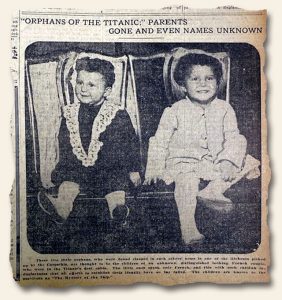 Such is a case with a Detroit newspaper dated six days after the Titanic’s sinking which had a front page photo of the: ” ‘Orphans Of The Titanic:’ Parents Gone and Even Names Unknown“, the caption noting in part that the: “…two little orphans, who were found clasped in each others’ arms in one of the lifeboats…thought to be the children of an unknown…French couple…The little ones speak only French…all efforts to establish their identity have so far failed…”.
And there the story ends for readers of that April 21, 1912 issue of the Detroit News-Tribune [1]. One wonders what became of the unfortunate children.
Well, they were part of an intriguing story with a good ending.

This link [2] has the details, but in short, the children’s father absconded from France with the boys after losing custody of them in a divorce settlement. The father died on the Titanic, and photos of the boys in newspapers were identified by the mother in France, who would soon be reunited with them.

Did you ever read a news report from  a century ago and wonder how it finished out? The internet makes it possible to find out!