Every collector has seen this famous headline from 1969, or one of the thousands like it which appeared on every newspaper at the time: “MEN WALK ON THE MOON” (see DAILY NEWS, New York City, July 21, 1969 [1]). But an interesting quirk in coincidental history is inconspicuously buried inside, perhaps only of interest to baseball fans–and every collector of historic newspapers.
The story is best told by Major League Baseball in their piece titled: “The Story of Gaylord Perry, the Moon Landing, and a Most Unlikely Home Run”.
An excerpt reads: “…One day during the ’64 season, Dark [manager of the S. F. Giants] and San Francisco Examiner reporter Harry Jupiter looked on as Perry smacked some home runs during batting practice. Jupiter told Dark that Perry looked pretty good with a bat in his hands and remarked that the pitcher might even hit a home run one of these days. Dark’s response set in motion one of the weirdest coincidences in baseball history: “Mark my words,” he said, “a man will land on the moon before Gaylord Perry hits a home run.” 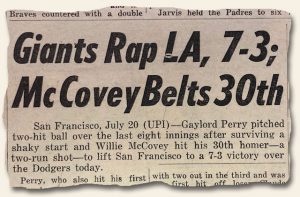 Jump ahead five years to July 20, 1969. Perry, now 30 and clearly established as one of the best arms in the game, was scheduled to start against the rival Dodgers. But there was something else happening that afternoon: Neil Armstrong and Buzz Aldrin were about to become the first men to set foot on the moon. You can probably see where this is going.
At 1:17 p.m. PT, Apollo 11 landed. Some 238,900 miles away at Candlestick Park, Perry stepped to the plate in the top of the third inning — and, wouldn’t you know it, he hit the first home run of his Major League career. As the righty told MLB.com back in 2009:
“Well, about the top of the third, over the loudspeaker, they were telling everybody to stand and give a moment of silent thanks for the astronauts who landed on the moon. And I’d say 30 minutes later, Claude Osteen grooved me a fastball, and I hit it out of the park.”
Alas, by 1969 Dark had moved on to managing the Cleveland Indians, denying him the chance to say, “Hey, technically speaking, we did put a man on the moon before you hit a home run.”
A fascinating piece of history, verified with both reports in this issue of the Daily News.