As an attempt to make good use of the extra time many of us now have as a result of the current restrictions on mobility, about a week ago (from this post) we sent out an email asking collectors to submit their collecting stories. Three topics were suggested:

The response to-date has been overwhelming (and new entries are welcome – just email them to me at guy@rarenewspapers.com). Over the next few months our plan is to post 1-2 per week. Today we begin with a contribution from R.P. in Boise, Idaho. Enjoy. 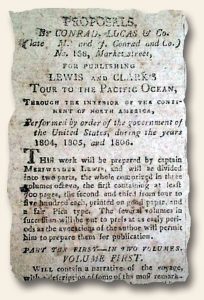 In response to your request for posts regarding your customer’s collections I would like to answer a bit of all three suggested topics.

I have been a rare book collector for over 45 years.  I am a native Oregonian who lives in Idaho.  As a Northwesterner with an interest in history, early on I began to collect first editions of accounts of early expeditions and travels to the western United States.  Because Lewis and Clark reported the first overland expedition to the Pacific across mostly territory controlled by the United States, I needed to begin adding their expedition items to my collection.

In my early collecting days, Lewis and Clark first editions were beyond my means.  However, accounts of their expedition exploits, and President Jefferson’s early messages to Congress, were available in newspapers and some magazines.  So I began collecting as many newspaper recordings about the expedition as I could find.  My collection isn’t huge, but it provides an immediacy which even first edition books don’t provide since all books (even Congressional Journals) were printed well after the activities being reported.  The close proximity of a newspaper account to the actual event occurrence is a primary reason why I collect newspapers and 18th Century American magazines.

Your second suggestion asks about surprises.  From your last catalog I purchased a newspaper from 1848 which contained a Congressional recording of three votes made by Abraham Lincoln while he was in the House of Representatives.  Although I am not a Lincoln collector, I thought this was interesting  and worth owning.  Also, the price was right.  When I perused the Newspaper, I saw two articles regarding the soon to be completed establishment of a new Oregon Territory.  The writers of both articles (one was a Georgia senator and the other was South Carolina’s John Calhoun) advocated that immigrants to Oregon be able to bring their slaves to the territory with the retention of their slave status.  Happily, Oregon did not become a slave territory nor a slave state.

These articles fit well with my reasonably large collection of books, maps and ephemera related to the Oregon Territory which encompassed the present states of Oregon, Washington, Idaho and parts of Wyoming and Montana.