For the next day and a half I’ve been left in charge of a small portion of things in the Rare and Early Newspapers [1] world, which must mean I’m learning something.  Still, I am going to rattle off this week’s post between all the responsibilities as I am fiercely resolved to not let anyone down.  If you’re disappointed with my submission, please check in again next Friday when I have a little more time to reflect.  But I do want to take a momentary glance at this recent week before it is forgotten in the next discovery. 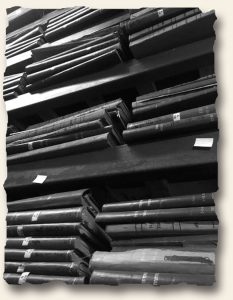 Requests for birthday papers [2] are a regular occurrence here, and it’s a good excuse to go hunting in the racks, exploring the mazes of columns and rows.  To me, the best thing about searching for these issues is that they frequently hold a hitherto unknown element that increases the value beyond “a regular NYT from 1959”.  However, I am learning that content is in the eye of the beholder.  Yesterday I climbed and crouched (and crawled at one point) pulling every volume that might still contain the specified date.  When at last I laid it flat on one of the twenty(?) portable viewing surfaces, I felt a surge of confidence that I had found something exceptional and I cornered the closest newspaper veteran to verify my discovery.  “Winston Churchill,” I pronounced, “shaking hands with Harry Truman, on the front page above the fold.  Is that special content?”

It turns out that it was not.  It turns out Churchill [3] and Truman [4] were “getting together like that all the time.”  Those were the very words used to burst my bubble and I couldn’t help wondering a bit about these giants of recent history — one with an abrupt ascension to the highest office in the land, and the other whose stirring oratory inspired hope in hopeless times — who were nevertheless real people with routines and commonplace interactions and details of living, even as they went about setting their mark on everything that came after.  Newspapers are crammed to bursting with so many important people, so many consequential events and so many seemingly insignificant things, as well.   Regular treasure hunters already know this; the novices might just discover it in a birthday paper.  At any rate, this week I learned that there are at least two quests involved when I head out into the rows, coordinates in hand: the thing I know I am looking for, and the thing I didn’t expect to find.

I hope today you uncover a bit of treasure yourself.

I am enjoying the fresh look! Keep them coming. Great read

I love your blog posts and am interested in hearing your experience with rare and early newspapers. I just got a Niles Weekly Newspaper from 1821 that has an article I’m extremely interested in – about Col. Benjamin Tallmadge’s case agains the captors of Major John Andre. Last week I purchased a Harper’s with an engraving of the capture (which I spoke to you about) so this Niles paper is a wonderful companion piece. I’m so interested in paper that are contemporary to the treason of Benedict Arnold and Andrê’s fate. And while there is not much I’ve found existing, I am treasure hunting for them. I absolutely love your shop and I do think I may give the gift of birthday editions for some friends as it sounds like a fascinating way to mark the day.

Alisa, thank you for taking the time to comment — what an encouragement to continue “talking aloud” about these early days. I enjoy hearing about the variety of expeditions and have a hard time focusing my attention on the thing I am supposed to be doing, as I want to wander along with each collector. So send along updates, please. Best of luck…

Thanks for commenting, Adam! I am on the schedule for Thursday night’s release — so check in weekly to read my bits and pieces. In the meantime, Guy’s regular columns are informative (as opposed to my reflective pieces) and well worth perusing.

So interesting to see anew through your eyes…keep sharing!