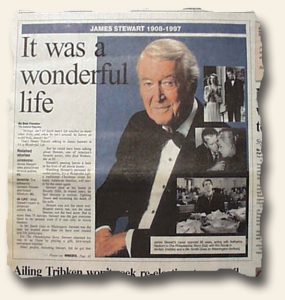 Over the past few months this reality was brought home to the staff at Rare & Early Newspapers as we discovered the death reports of some of the most famous Hollywood celebrities of all time – nearly all within Los Angeles newspapers. As Mark Twain not-so-subtly revealed through Ebenezer Scrooge in A Christmas Carol, and Frank Capra reinforced through the eyes of George Bailey (Jimmy Stewart – shown above) in It’s A Wonderful Life, sometimes a glimpse at the brevity of life can be a healing, re-purposing salve for the soul. With this in mind, please enjoy(?): Death Reports of the Hollywood Famous [1]