Whereas we have many original newspapers containing Judaica-themed [1] content, finding issues with mentions of Sabbatai are quite rare. If you’ve never heard of Sabbatai Zevi, the infamous 17th century, self-proclaimed, long awaited Jewish Messiah who converted to Islam, he’s certainly worth exploring. We recently came across a report in an Oxford Gazette (issue #8) from 1665 [2] which we believe may very well be his first mention in a bonafide newspaper (see below). The problem with “firsts” is that a first is only a first as long as a newly unearthed earlier first doesn’t relegate the older first to a second. 🙂

Has anyone ever viewed or heard of an earlier mention of him in a newspaper? 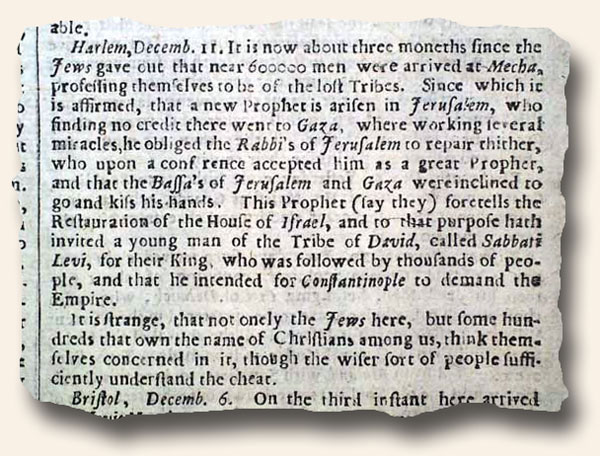 2 Comments To "Does anyone know… re: Sabbatai…"

There are a number of articles about him to be found in the Oxford/London Gazette. The prime Sabbatai Zvi content, though, is in issue #102 of the London Gazette, dated 5 Nov. 1666, which gives an extremely lengthy report on his forced conversion to Islam, “leaving to the Jews nothing but shame and repentance that they have suffered themselves to be so easily and long deluded.” That’s the least he was heard from. (The same issue, incidentally, contains a report from Paris about “His Majesty’s company of Muskettiers (sic) … commanded by Monsieur D’Artagnan,” of “Three Musketeers” fame.)

Hello Eric – Sorry we missed your note. Thank you. We were aware of the Sabbatai content within this issue, but did not know its full significance. We also missed the report from Paris. Thanks again!