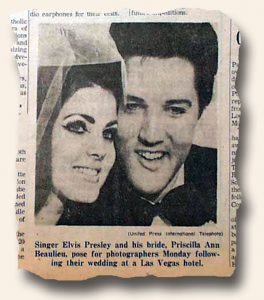 Last week I traveled to Springfield, Massachusetts via The Springfield Union of May 2, 1967 [1]. The front page announced “Elvis Presley Ends Bachelorhood”. “Rock ‘n’ roll singer-actor Elvis Presley, who amassed a fortune as a swivel-hipped forerunner of the Beatles and who remained an unreachable dream to his fans, married an Air Force officer’s daughter Monday… 22-year-old Priscilla Ann Beaulieu in a posh Las Vegas strip hotel… why he decided to surrender his bachelorhood, Presley, in a jovial mood, replied: ‘It was about time.’…”