Wounds from the Civil War were still very fresh in the hearts & minds of the Southerners in the months after the Civil War, and perhaps sensitivities were no more acute than among the residents of Richmond, the capital of the Confederacy up to the closing days of the war. 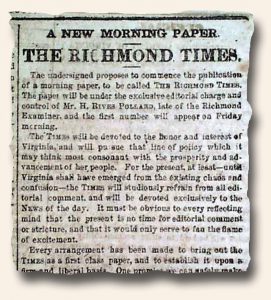 With this in mind, a new newspaper was begun in the city of Richmond during the closing day of April, 1865, the same month the capital fell to the Yankees. The newspaper was announced in the April 20 issue of the “Richmond Whig” [1], the announcement headed: “A New Morning Paper – The Richmond Times” and the text including: “…The paper will be under the exclusive editorial charge & control of Mr. H. Rives Pollard, late of the Richmond Examiner, and the first number will appear on Friday…will be devoted to the honor and interest of Virginia…For the present at least–until Virginia shall have emerged from the existing chaos and confusion–the Times will studiously refrain from all editorial comment & will be devoted exclusively to the news of the day. It must be obvious to every reflecting mind that the present is no time for editorial comment or stricture, and that it would only serve to fan the flame of excitement…”.

It is nice to read that there was compassion among the victorious Yankees as the occupied Richmond. There were certainly options that could only have hurt the cause of reunion, but the publisher wisely opted to consider discretion as the better part of valor.