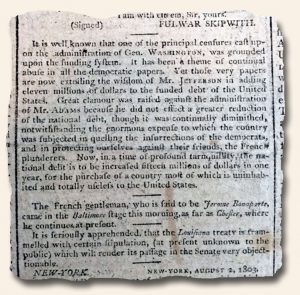 It is always interesting to read criticisms of political decisions of centuries ago with the luxury of hindsight. Early newspapers allow today’s reader to recognize just how much thought was not just wrong, but laughably wrong.

One example is in the August 6, 1803 issue of the “Columbian Centinel” [1] which contains a letter complaining about Presidents increasing the national debt: “…those very papers are now extolling the wisdom of Mr. Jefferson in adding eleven millions of dollars to the funded debt of the United States. Great clamour was raised against the administration of Mr. Adams because he did not effect a greater reduction of the national debt…Now in a time of profound tranquility the national debt is to be increased fifteen millions of dollars in one year, for the purchase of a country most of which is uninhabited and totally useless to the United States.”

From that purchase in 1803 would be carved fifteen future states as well as two Canadian provinces. Its value to the United States would be incalculable today, and in fact was considered an incredible bargain many years before the Civil War.