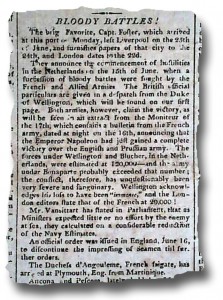 [1]Today’s journey took me to Boston, Massachusetts, through the Independent Chronicle [2] of August 3, 1815. There I found the lengthy report from the Duke of Wellington to the secretary of state for the war on the Battle of Waterloo. “…The position which I took up in front of Waterloo… and the Marshal had promised me, that in case we should be attacked, he would support me with one or more corps, as might be necessary… The enemy repeatedly charged our infantry with his cavalry, but these attacks were uniformly unsuccessful…”. This was the defeat of Napoleon Bonaparte, ending his rule in France.