[1]150 years ago, much of the nation was still reeling from the death of Abraham Lincoln. A mere 10 days previous time stood still and tears flowed freely at the news that the President had been killed. Did many travel to Washington, D.C. to mourn his passing? Did some visit the very site of his tragic and untimely demise to place a candle… flowers… mourn? The Philadelphia Enquirer, April 17, 1865 [2], not on only printed a sketch of the captured John Wilkes Booth, but they also included a front-page schematic (right) of the back-alley escape route where a horse was waiting for the infamous villain and his accomplice. While the region has gone through several transformations over the course of the last 150 years, this same alley exists today. The current-day photo shown below was sent to us be a collector friend who also included the following note:

I have attached a picture of the rear of Ford’s Theater as it looks today (showing the original windows/doorways that have been bricked-up)…and I want to point out that the alleyway shown on that April 17th issue is incredibly, to this day, the only exit on the entire block and proportioned to what it was in that newspaper.

If you’ve never visited Ford’s Theater in Washington, D.C., it is certainly worth the trip. 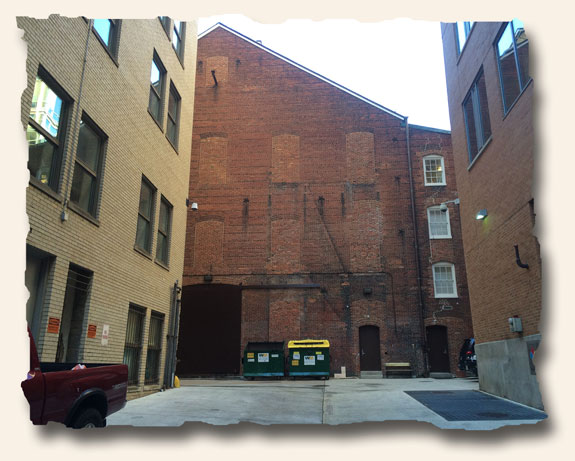 [3]Note: During my days as a Middle School Teacher, can anyone guess the most common question students asked upon visiting this spot during a school trip?