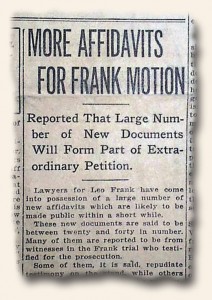 [1]Today I traveled through Atlanta, Georgia by the way of The Atlanta Constitution dated April 7, 1914 [2]. There I found the defense attorneys for Leo Frank had come into possession of a large number of new affidavits which would be made public shortly. Also coverage of the war in Mexico between Carranza and Pancho Villa. This also has the reporting of the Fall of Torreon with the reporting of the expulsions of the Spaniards.

“Watchful, Waiting” policy is how Lloyd Brown was dealing with his 14-year marriage as he was bringing a divorce suit to court. He said shortly into the marriage  his wife “began to take a violent dislike to him… She had not only left the house, but had taken all the covers off the bed before so doing. I borrowed some more from a neighbor and, when my wife came back in the morning,…I explained to her that to her that things couldn’t go along that way much longer… I just sat there and said nothing. Well, that made her madder and madder, I just sat still and kept quiet. Finally she hit me over the head with a fire shovel.”  She left that night and never returned. Divorce granted.