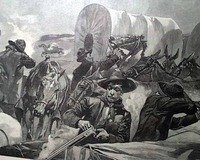 Few eras of American history have been romanticized as the  Post-Civil War 19th Century [1].  For those who grew up in the 1950’s & 1960’s, television had more than its fair share of Western-themed shows. And the “Wild West [2]” was a common feature on the silver screen as well.

Not only can one capture a flavor of that time when the American frontier was pushing further West, but actual historical events can be read as captured in newspapers of the day, when the events happened. This is the intrigue of collecting rare and historic newspapers.

From the moment the Civil War [3] ended, the national focus was on the lands west of the Mississippi. It was common to find reports, even in newspapers from the big cities of the East, of skirmishes with Indians on the Great Plains and elsewhere. The Custer Massacre perhaps ranking as the most notable, but reports can be found on the Battle of Wounded Knee, Captain Jack and the Modoc Indian War, reports of Geronimo, Sitting Bull, the Apaches and others. Newspapers are a great resource for those wishing to explore/collect Native American history [4].

And what about Outlaws & Gunfights [5]? Stage coach robbery reports are not an uncommonly found in newspapers from the 1870’s and 1880’s, and train robberies and bank robberies could be found scattered throughout newspapers of this period as well. It was a time when some of the more famous—and infamous–names of American history could be found in newspapers, including Jesse James and his gang, Billy the Kid, Wyatt Earp (yes, there are newspaper reports of the Gunfight at the O.K. Corral), the Dalton Gang, Younger brothers, Robert Ford, Buffalo Bill, Jim Bridger, Vasquez, Doc Holliday, Kit Carson,  Lizzie Borden, and on and on. Although “Jack the Ripper [6]” was a name from London crime history his deeds made headlines on this side of the Atlantic as well. Reports of their deeds are not fictionalized; they are the events as reported in newspaper accounts of the day. 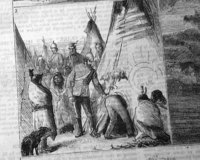 Although crime reports were common, there is so much more in newspapers from this era. Politics certainly found their way into newspapers on a daily basis.  Ulysses S. Grant [17] and James Garfield [18] were perhaps the most notable Presidents of the era, and reports on the latter’s assassination are commonly found.  Science and innovation were the focus of the famous title “Scientific American [19]” which began in 1845 and still publishes today. Within its pages were many reports on Thomas Edison [20], Alexander Graham Bell [21] and their inventive work, plus illustrations of the creations of many of the devices and improvements we still enjoy today. Many were first unveiled in Philadelphia’s Centennial Exposition [22] of 1876 and the Columbian Exposition [23] at Chicago in 1893.

It was a time when Brigham Young [24] and the Mormons [25] were venturing west, ultimately to settle in the Salt Lake City Valley. P.T. Barnum [26] was making news with his circus, and Frederick Douglass [27] & Booker T. Washington [28] were coming to national prominence as spokesmen for the newly emancipated slaves. The Chicago Fire & the Johnstown Flood were but two disasters which changed the American landscape and graphic accounts were more brutal in the 19th century then they are today. 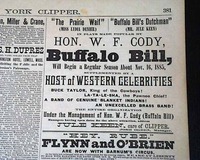 As is the case with present-day newspapers, sporting reports [29] were typically found, with baseball, football, tennis and golf gaining widespread popularity as diversions for not just the wealthy but for everyone.

As you see the post-Civil War [1] era was very rich in history. And I only touched on a few of the highlights. Newspapers of the era reported not just the events & names we know of through history books, but captured the mundane events of daily existence which provide a fascinating flavor of life in America when the wealth & prestige of the United States was emerging upon the world landscape. A world awaits the collector who delves into this fascinating era of American history.