[1]I would argue that beyond the Civil War [2], the era of American history which evokes the most interest among our collectors is unquestionably the Revolutionary War [3]. With a cast of characters who still rank among the most memorable in history—Washington [4], Adams [5], Hancock [6], Jefferson [7], Henry [8], Franklin [9], Paine [10], and more—and a plot, which if it were not true history would serve as an excellent screenplay for an exciting movie—an oppressed, energized people seek to break free from the reigns of oppression and dominance from abroad—it is easy to see how the events of the Revolutionary War [3] continue to intrigue and offer a foundation upon which to reflect as today’s world grapples with many of the same issues despite the 230+ years which distance us from those notable events.

And what could be better than experiencing those events just as those who lived through them? Newspapers offer that opportunity. Genuine issues, once held and read by those who lived through those turbulent days before being relegated to the back shelves of libraries, are now part of the inventory of Hughes Rare & Early Newspapers [11]. And at prices which might surprise many (see Revolutionary War issues for $60 and under [12]), as a hobby which is relatively unknown to the collecting world has yet to cause demand and scarcity to drive prices beyond the means of the average collector. Of course, there are still many that fall into the category of what we refer to as, “The Best of the Best – Revolutionary War Edition [13]“.

Of significance is that British titles, which offer excellent coverage of all American events given their role in attempting to placate the demands of the Americans while maintaining control of their colonies [14], allow ownership of battle reports of the war for under $100, with 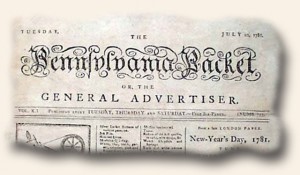 [15]some very notable events in the $200-$300 range. American newspapers remain among the most desired but their scarcity is reflected in their prices. With a collection of the “Pennsylvania Evening Post [16]” which included the Declaration of Independence [17] bringing $600,000 in auction recently, it would amaze many that the same document is available in London’s “Gentleman’s Magazine” issue of August, 1776 [18] (took news 3-4 weeks to traverse the Atlantic) for under $4,000. Other disproportionate prices between British and American newspapers entice many to gravitate to the British titles while prices and availability remain attractive.

The “London Chronicle [19]” is one of the better British titles in reporting the Revolutionary War [3]. From the Battle of Lexington and Concord [20], to Bunker Hill [21], Battle of New York [22], Saratoga [23], Washington crossing the Delaware, treason of Benedict Arnold [24], Guilford Court House [25], to Cornwallis [26]’ surrender at Yorktown [27], this  newspaper offers coverage which equals the American newspaper accounts. In fact many British reports were taken verbatim from American newspapers. Of equal quality in report news of the day was the “Edinburgh Evening Courant [28]” from Scotland as I have found all events of the Revolutionary War to be reported in this title as well. Other UK titles which covered the war include “The Glocester Journal [29]”, “Aris’s Birmingham Gazette [30]”, the “Edinburgh Advertiser [31]” and the “Glasgow Mercury [32]” to name a few.

But perhaps the best and most available title of the Revolutionary War period would be the “Gentleman’s Magazine [33]” from London, it having a long printing history from 1731 to the 20th century so it encompasses not just the Revolutionary War in great detail by the  entire scope of American history. As an added treat  this title typically included one of more plates within each issue, which included maps as well. And during the years of the Revolutionary War [3] were found many maps of American colonies [14], battle sites as well as large foldout maps showing the entire scope of the united colonies at that time. The maps [34] alone have found a keen interest among collectors, separate from the issues in which they were stored for over 200 years. As is true with the British titles mentioned, “Gentleman’s [35]” included all notable events and documents, including the Articles of Confederation [36], the Causes and Necessity For Taking Up Arms, all major battles of the war thru the treaty between Washington [4] and Cornwallis [26], and even the document by King George III [37] which officially ended the war. And all the major names of the war from both the British and American sides have found their way into the pages of “Gentleman’s Magazine [35]”. 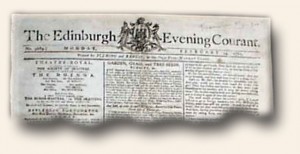 [38]American titles are available as well. Some of the more rare would be those from the South which are virtually impossible to find, and when they do surface their prices are beyond the means of most collectors. Some of the more commonly found titles would be the “Pennsylvania Evening Post [16]” from Philadelphia, the “Pennsylvania Ledger [39]” “Boston Gazette [40]” (which featured an engraving by Paul Revere [41] in the masthead), “The Pennsylvania Gazette [42]” and “Pennsylvania Packet [43]” among others. And dipping back a few years before the outbreak of the war, when tensions were building with much evidence in the newspapers of the day, the “Pennsylvania Chronicle [44]” and the “Boston Chronicle [45]” offer excellent insight into events of the day from the years 1767-1769 for under $200 for most issues.

Regardless of your interest in the Revolutionary War [3], whether it be the famous names that came to prominence, the battles of the war, or a focus on a singular event or locality, genuine newspapers of the day are available for the collector. It is a hobby with limitless possibilities, and offers a unique opportunity to literally hold history in your hands.

2 Comments To "Collecting the Revolutionary War on a budget…"

Where did colonists in the 1770s get their newspapers? Were they delivered or get readers go to a certain place to get them?

Hello Michael – I could answer this, but I would only be making a semi-educated guess. I’ll leave this discussion open. Perhaps someone “in the know” will respond.