A genuine collectible, over 300 years old, for $60 or less [1]. Is there a field of collecting today which has items of such age– in nice condition–for $60? The hobby of collecting rare & historic newspapers likely sits at the top of what must [2]be a very short list. And such prices, along with tremendous availability of titles & content, are part of the intrigue of this fascinating hobby which remains unknown to almost everyone. And this, in large part, is the reason prices are outrageously low in comparison to the relative rarity of other collectibles.  While issues do run the gamut price-wise from newsbooks [3] (at the upper end) to coffeehouse newspapers [4] (typically at the lower end), it is a fascinating field for the historical hobbyist on a budget ($20 and under [5]).

The ‘London Gazette [6]‘ is the world’s oldest continually published newspaper, having begun in 1665 and is still publishing today. With such historical depth you would expect to find virtually every major event in world history within its pages, and you would be right. The Great Plague [7] and Great London Fire [8], William Penn [9] being granted land in the New World, the death of noted pirate Captain Kidd [10], the battles of the French & Indian War [11] and Revolutionary War [12] and so much more are found in not only this title but other newspapers of the era. First reports of such notable events can sell in the thousands of dollars, but an interesting facet of this hobby is that follow-up reports of a few days later can fall well within the comfort level  of the average collector.

Both age and graphic appeal come together in the London ‘Post-Boy [13]‘ newspaper, with issues from the 1718-1725 period featuring two ornate engravings in the masthead in addition to a very decorative first letter of the text. Add to this the relative small size of this single sheet newspaper and you have a terrific item for display for under $55.

With American newspapers not beginning until the first decade of the 18th century (one title was published in 1690 but lasted just one day), and most American newspapers through the Revolutionary War [12] being very rare, British titles are an excellent source for collecting all the notable events not only in American history, but in world history as well. And the reporting was often extensive, for remember that the colonies [14] were part of Great Britain through 1776.

The ‘London Chronicle [15]’ was a popular British newspaper which documented amongst its pages virtually all American events since its founding during the French & Indian War [11]. Yet another periodical, the ‘Gentleman’s Magazine [16]‘, is an [17]excellent source for period reports of American events since its beginning in 1731, and one of its features was the printing of maps of all corners of the globe, many of which show North America and specific colonies. From James Oglethorpe’s settling the colony [14] of Georgia, to Ben Franklin [18]‘s famous kite experiment, installation of the Liberty Bell, the enactment & repeal of the hated Stamp Act, all events of the Revolutionary War [12], to the mutiny on the Bounty & so much more, the ‘Gentleman’s Magazine [16]’ offers a terrific repository of American and world history at very affordable prices. Plus, there are reports of Colonel George Washington [19] from 1754 when he was just 22 years old and relatively unknown, and for the music buffs there are works by the composers [20] Hayden, Handel, and death reports of Mozart and Beethoven within its pages. The early battles of Napoleon [21] & other European reports are logically found in this title as well.

While American newspapers of the Revolutionary War [12] and before are generally pricey, ranging in the $400 – $1000+ range, two notable exceptions exist being the ‘Boston Chronicle [22]’ and the ‘Pennsylvania Chronicle [23]’, both from the 1768-1769 years. Because their circulation was widespread they are among the more commonly held colonial titles by institutions, & consequently come on the market when libraries convert from hard copy to microfilm or digital. They detail the entire spectrum of American life from just before the Revolutionary War [12] while providing an interesting perspective on American politics during those critical years. Complete, genuine issues are typically available for under $200.

American newspapers from after the American Revolution [12] become more available and at dramatically lower prices while still containing a wealth of notable content on the founding years of the federal government. The ‘Pennsylvania Packet [24]’ of Philadelphia [25] was one of the more successful titles, and was the very first to print the Constitution of the United States [26]. While that issue, September 19, 1787, ranks well into six figures, 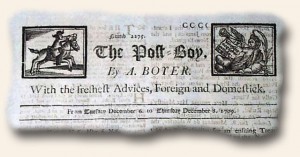 [27]dates surrounding it are typically found in the $45 – $80 range and offer a  perspective of life in the city where and when the Constitution [26] was being created. The ‘Columbian Centinel [28]’ from Boston [29] was perhaps the most successful title in 18th century America and its pages document the complete scope of America politics and life from 1785 thru Washington’s election [30] and inauguration [31] to his death [32] just weeks before the end of the century.

Other 18th century American titles which are within the budgets of even the most modest collectors are the ‘Connecticut Courant [33]’, ‘Dunlap’s American Daily Advertiser [34]’, ‘Gazette of the United States [35]’, the ‘Massachusetts Spy [36]’, and ‘The Herald, A Gazette For The Country [37]’ and others. Nice issues from the formative years of the federal government can be had for under $50 each.

While first reports of the most historic events of the 17 [38]th and 18 [39]th centuries will always command top dollar among the most  savvy of collectors, the hobby of collecting rare newspapers offers a tremendous wealth of issues at surprisingly low prices, while at the same time offering fascinating content on life only known to others through history books. And this hobby is one that offers the entire  spectrum of political, economic, and social history to every collector. What other hobby can make that claim? But perhaps most importantly, this hobby let’s you hold—quite literally—history in your hands.