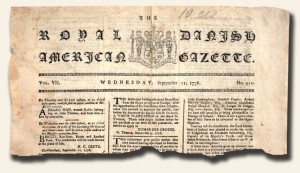 The Waldo Lincoln collection of eighteenth- and nineteenth-century West Indian newspapers numbers several thousand issues — many being the only known copies — and is one of the most important to be found anywhere.

The Royal Danish American Gazette was the first newspaper published in what is now the Virgin Islands. It was founded in 1770, when publisher Daniel Thibou relocated from St. Kitts to establish the first press on St. Croix. Portions were printed in Danish for the benefit of St. Croix’s sizable Danish population. We know that it had a fairly wide circulation, for a number of its articles were reprinted in contemporary American newspapers. Scholars have recently taken renewed interest in the significance of the West indies for early American history; but given the tropical climate, relatively few primary sources survive in West Indian libraries.

Hello, I was wondering if it is possible to get online access to the The Royal Danish American Gazette? We are looking for any information in regards to a house at 2 Church Street Christianshed. The possible articles about this house and the family that owned or worked at the house would be very interesting and valuable to us. Any assistance would be greatly appreciated.

Hello Christine – I hope someone will answer this. We do not know how to obtain access.

Hi Christin! Issues of The Royal Danish American Gazette from 1770-1802 have been made available by the State Library in Denmark: [2]

You can mail the library and ask if more issues will become available (or if this is all they have). Best, Rikke