[1]Today I made a return trip to Carlisle, Pennsylvania, via the Valley Sentinel from March 19, 1912 [2], where I found Frank Coffyn had an aeroplane which was able to not only fly, but swim and crawl! It had also been used to take aerial photographs of the islands and shipping harbors of New York City. With the fitting of aluminum pontoons, it enabled the plane to float on the 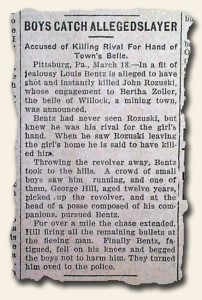 [3]water and power along the ice floes in the Hudson. In researching Mr. Coffyn, I found that Wilbur Wright invited him to Dayton, Ohio, where he began flight instruction in 1910.

Another article is one in which Mr. Bentz had instantly killed Mr. Rozuski out of a fit of jealousy over an engagement. After the shooting, Mr. Bentz threw the revolver away. However, a group of small boys saw him running away… and a 12-year-old, acting as the head of the young “posse”, picked up the revolver and pursued Mr. Bentz for over a mile while firing the remaining bullets at him. Finally, the fatigued Mr. Bentz fell to his knees and begged them for no harm. They turned him over to the police.  This almost sounds like a scene from the “Lil’ Rascals”!