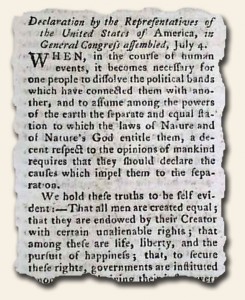 [1]Fellow collector Michael Gulvin asks a question which many other collectors may have wondered:  “On what day of the month did the Gentleman’s Magazine for August, 1776 [2] become available? We have a time-line for the American newspapers, and we know that the London Chronicle printed the Declaration in its August 17th issue, but do we know the actual date the Gentleman’s Magazine printed the Declaration of Independence for its August issue?”

Magazines typically published very late in the month shown on the title/contents page. With the “London Chronicle [3]” publishing the Declaration of Independence in its August 17, 1776 issue, and presuming they had interest in publishing such a significant document as early as possible, it is presumed the Declaration was received in London very close to that date. Their previous issue was dated Aug. 15, so August 15-17 would be the presumed period when the document arrived in London. It is curious to note that the “London Gazette” never printed the Declaration of Independence.
Monthly publications are more difficult to pin down in terms of publication dates, however datelines of news reports found within offer great clues. The Historical Chronicle near the back of the August issue of the “Gentleman’s Magazine” has datelines beginning July 10 and the latest date mentioned is August 31, the very last day of the month. Obviously the magazine could not have printed prior to August 31, so the first day or two of September would be the presumed printing dates.
The same was true with American magazines as I recall the June, 1776 issue of “The Pennsylvania Magazine” had the very significant announcement that Congress had voted to approve the Declaration of Independence, with a dateline of July 2, 1776. Obviously that June issue was printed early the following month.

5 Comments To "When did the “Gentleman’s Magazine” print the Declaration of Independence?"

The 10-13 August 1776 issue of the London Chronicle contains a brief, yet significant, breaking news announcement:

“Advice is received that the Congress resolved upon independence the 4th of July; and, it is said, have declared war against Great Britain in form.”

“Things were really in such a perilous state that it does not seem to have surprised any one when the news arrived that the Colonies had declared their independence. On the 12th of August the papers each and all appearing on that day contained, in identical words, the following paragraph (same as above). A mail from America had reached London the day before which had been brought to Falmouth from New York, by the Mercury packet-boat. It seems reasonable to suppose that the short paragraph above quoted, that went the round of the papers, was a communique from the Government. Had there been an organized agency for collecting news, it could hardly have failed to post the press as to the contents of the Declaration itself.”

According to The Nation, on the 13th of August, the Gazetteer published a more lengthy report, but still no contents of the actual Declaration. On the 14th of August, the Morning Chronicle and London Advertiser printed “Copies of the Declarations of War by the Provincials are now in Town and are said to be couched in the strongest terms.”

The Nation also states that the full text of the Declaration of Independence is found in the British Chronicle for August 14-16.

For those interested, the Nation also writes that the first expression of editorial opinion about the Declaration of Independence came on the 19th of August in the Morning Post: “The Congress have acted with the utmost impolicy, in declaring the United Colonies free and independent States: for after such an avowal of their Republican principles, every European Power must now abandon them to the punishment due to their Villainy and folly.”

On a side note, the 10-13 August 1776 issue of London Chronicle also contains two letter extracts dated at Staten Island the 7th and 8th of July, which also arrived in the Mercury packet. Public readings of the Declaration were held in Philadelphia, Trenton and Easton on July 8; and NYC and Princeton on July 9. If the Declaration arrived in New York by July 8, it very well could have been on the Mercury packet boat that arrived in London August 11.

In conclusion, it appears that we can definitively say news of official Declaration arrived in London at some time on August 11 while the potential window of arrival for the actual Declaration itself could be anywhere between August 11 and 14.

I believe I read somewhere that packet boats often arrived with the crew having read and familiarized themselves with the news of the boat. Some crew would often race the biggest news out to the taverns and printers first while the ship captain would take longer for the official mail exchange. If that is indeed the case, a possible scenario is that the Declaration did arrive on the Mercury packet on August 11, but only one or more crew had time to race news of the document to those printers going to press on August 12, 13 and 14. Then, by August 14, as the official document properly exchanged hands, the newspaper printers received it and typeset it just in time for the August 14 to 16 issue of the British Chronicle and the August 15 to 17 issue of the London Chronicle. Other British publishing dates include the Edinburgh Advertiser (Aug 20), Edinburgh Evening Courant (Aug 21) and Belfast News-Letter (Aug 27).

Tim and Todd – thanks for the information; extremely interesting and very much appreciated.

I found it interesting that “The Pennsylvania Magazine” of June 1776 stated that Congress had approved the Declaration on July 2, 1776. I would like to see the article as I doubt that this is what it says. As a park ranger at Independence National Historical Park, I see first-hand the confusion that people have about the events of July 1776. Many people confuse the passage of the resolution calling for independence with the Declaration of Independence; these are two different things.

On June 7, 1776, Richard Henry Lee of Virginia stood up in the Assembly Room in the Pennsylvania State House and offered a resolution to the Continental Congress which said, in part: “Resolved, That these United Colonies are, and of right ought to be, free and independent States, that they are absolved from all allegiance to the British Crown, and that all political connection between them and the State of Great Britain is, and ought to be, totally dissolved…”

Long story short, this resolution would be debated, at length, off and on, for almost a month, the Congress picking up the final debate on July 1st and passing it on July 2nd. So, the RESOLUTION calling for Independence is passed that day. Which is probably what the “Pennsylvania Magazine” reported?

The next step then was to send out the press release, or as they called it, a “Declaration.” Thomas Jefferson and the other members of the committee responsible for drafting the document turned the draft of the Declaration in on June 28, 1776. Since not everyone agreed to everything it said, the Congress would edit the document for two days, finalizing it on July 4. Later, that evening, the final draft was sent to the printing office of John Dunlap, the official printer for Congress (or as I like to call him, “The Kinkos for Congress”). That evening he set the Declaration to form on his printing press, and printed an estimated 200-300 broadside copies. These then were sent out to the 13 States, to the army in the field, the King, Parliament, the French, the Dutch and all over, telling the world what they had done and explaining why they had done it. Instructions were sent with these broadsides (press releases) instructing that they were to be used for public readings, to be re-printed, and printed in newspapers. It very well could have been one of these broadsides that had arrived in London in August of 1776.

If you had asked the founders what our birthday was they probably would’ve had said July 2nd, the day the RESOLUTION had passed. How do we know this? Well, on July 3rd, John Adams wrote a letter home to his wife Abigail telling her that they had passed the resolution on the 2nd. He goes on to tell her, “The second day of July, 1776, will be the most memorable epoch in the history of America. I am apt to believe that it will be celebrated by succeeding generations as the great anniversary festival. It ought to be commemorated as the day of deliverance, by solemn acts of devotion to God Almighty. It ought to be solemnized with pomp and parade, with shows, games, sports, guns, bells, bonfires, and illuminations, from one end of this continent to the other, from this time forward forever more.” This is pretty prophetic stuff. Of course one thing Adams does not see is that we would celebrate on the wrong day.

Now, there is a signing of a ceremonial copy, but that comes later. On July 19, 1776 Congress resolved to have the Declaration “engrossed” on parchment. Timothy Matlack, one of the Congressional clerks was given the privilege of getting it ready, and he has it ready for them to sign on August 2nd, 1776. Only about 49-50 men would sign that day, the others signatures added later. It is believed that the last person to sign was Thomas McKean of Delaware who may have signed as late as 1781.

Later on, after Independence was won folks just assumed that July 4 was THE day, and then all kinds of stories were told about what happened on the 4th. Most of it was based on truth, but not totally factual. Some of the founders, Thomas Jefferson among them, would later misremember what happened surrounding those days, and would state that they signed on July 4. The records of Congress and other documents prove them wrong.

I hope this helps to explain things a bit. Feel free to come and visit Independence National Historical Park anytime!

I have a question regarding this issue of The Gentlemans Magazine. There appears to have been 2 different printings of this issue. One where at the top of the pages the Declaration is printed on it says “Declaration of American Independancy” and the other version it says “Independancy of American Colonies declared by the Congress”

Now my question is which one was printed first? I would imagine the one that says “Independancy of American Colonies declared by the Congress” any ideas???

Hello Steve – Regarding your inquiry about the Gentleman’s Magazine, I’ve never noticed the discrepancy before. I checked the 20 or so issues we’ve sold over the years which have photos, and about 15 or 16 have “Declaration of American Independancy” at the top, while only 4 issues have “Independancy of American Colonies declared by the Congress”. While it is conjecture as to which was done first, I’m thinking that because the title page has “Declaration of American Independenacy” listed in both versions, at some point they noticed the discrepancy and change the top of page 361 to match. And you would think that with the latter being much less common (by our experience), it would have been the one to be changed to the former. But I have no hard evidence or knowledge to say that “Independancy of American Colonies declared by the Congress” was, indeed, on the earlier printings. I did check rather carefully all other aspects of page 361 and both versions are identical, even down to a flawed letter in one of the words, so I am convinced that the issue, or even the page, was not reset at some later point and reprinted. I strongly suspect both versions were printed on the same day (or days) and the heading was changed for whatever reason. – Tim Hughes