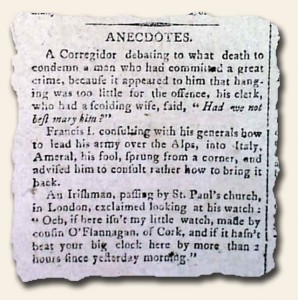 [1]In today’s travels, I found the Salem Gazette of August 16, 1811 [2] carrying a very small notification of the death of the Honorable William Williams. He was a signer of the Declaration of Independence. This also stated that he continued through life as a Washington federalist.

The back page featured a small “Anecdotes” article. One item had what some may consider as a very cruel and unusual punishment. “A Corregidor debating to what death to condemn a man who had committed a great crime, because it appeared to him that hanging was too little for the offence, his clerk, who had a scolding wife, said “Had we not best marry him?”.