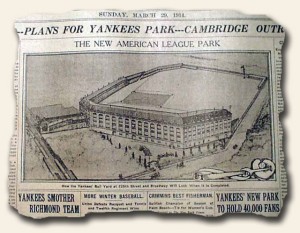 [1]A question for all the Yankee fans out there: what happened to this stadium?

The March 29, 1914 [2] issue of the “New York Times” shows the “…Plans For Yankees Park…” with a detailed drawing captioned: “How the Yankees’ Ball Yard at 225th Street and Broadway Will Look When it is Completed.” and beneath which is a detailed article headed: “Yankees’ New Park To Hold 40,000 Fans” “Double-Deck Grand Stand of Steel and Concrete to be Completed in September“. The article (see photos) provides many details of the new ball park, however I can find no record of it being built.

The Yankee website notes that the team shared the Polo Grounds with the Giants from 1913 through the early 1920’s until the stadium called the “House that Ruth Built” was ready for use in 1923. Does anyone know the history of this “mystery stadium” supposedly built in 1914?

You made me curious even though I am not a sports fan.

I spent about an hour researching your question and came up with no answer. But, along the way (you know, all those links and dif sites) I noticed that the Yankee Ball Park which opened on 4/18/23 and served the Yankees till 2008 was bulit at a cost of $2.5 million.

That is an 11,000 multiple increase in cost. This should give us all a good perspective on how our economy has changed in 86 years.

Now, back to your question.