Few thrills are greater in the rare newspaper collecting hobby than finding the unexpected historic gem. Those moments of serendipity are the treasures we all hope for at some point in our quest for new additions to our collection.

I have come across many in my years of collecting with two among the more interesting.

Long before the days of the internet I subscribed to the catalogs of the prestigious Sotheby’s auction house in New York City as they occasionally ran Americana sales which included newspapers. One sale offered an 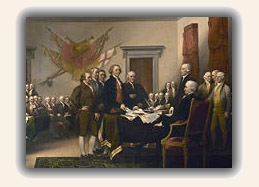 [1]issue of the SOUTH CAROLINA GAZETTE from August of 1776. Trying to assemble one newspaper of all thirteen colonies from the Revolutionary War, this would be a new addition to that set. The lengthy catalog description noted some war skirmishes but nothing significant. But that was not a concern to me as I was only seeking a title from that colony from during the war, and the date of 1776 made it that much better. I placed my bid and was excited to learn I won the issue.

Several weeks later the issue arrived. In preparing it for my collection I casually looked over the content, and you can imagine my shock upon finding on page 2 a complete printing of the Declaration of Independence! I couldn’t imagine the incompetence of the cataloger–employed by Sotheby’s no less–who missed this report.

Not many years ago we purchased the newspaper holding of a public library in Massachusetts which includes a lengthy run of a Springfield newspaper, in fact two truckloads of volumes ranging from the mid-1800’s thru the latter part of the 20th century. Knowing the wealth of historical material which could be culled from this collection we put our attention to those events for several months upon its return to our

[2] office & warehouse in Williamsport. Some time later we realized that the sport of basketball was founded in Springfield. Could we be so fortunate to to find a report off the very first game every played? Did the local newspaper even report what is now an extremely significant event in the history of basketball?

Indeed they did. The Springfield Republican, March 12, 1892 [3] issue reported somewhat inconspicuously on page 6 an event headed “Basket Football Game” played the day before (which we now recognize as the first public basketball game), with mention of James Naismith who is recognized as the founder of the sport. It was a thrill to find the report which languished for over 100 years, unbeknown to anyone, in the back shelves of a library. Curiously the curator of the Basketball Hall of Fame didn’t appreciate its significance, however the Smithsonian Institution did as it now is part of their collection.

What historical gems have you discovered serendipitously in issues purchased for another reason, or as part of a collection where nothing special was expected?  Feel free to share your stories with other collectors!

Recently I found a book called “America Goes to Press” by Laurence Greene, published in 1936 which I am sure would be of interest to newspaper collectors. It prints quite lengthy newspaper reports on events from the War of Independence to the assassination of Archduke Ferdinand at Sarajevo. I expect some of the newspapers from which extracts are included will be on your website but there are some fairly obscure newspapers included too. I recommend this book to everyone interested in American history.

David – Thanks for the information! I’ll be in pursuit of this book, as I am sure other collectors will be as well.
Tim Hughes

Another unusual book that your website visitors might find amusing – “Yesterdailies” by Anthony Armstrong, published in 1931 or 1932. It gives tongue-in-cheek reports of events before newspapers existed, starting with The Flood!

I thought this to be an interesting item to share. in 1884 the citizen of iLion i believe which moved to rochester became the first newspaper [and not the new york herald or san francisco chronicle] in the world to be composed mechanically and printed by electric power. it was officially confirmed on march 14 1884 that the ilion citizen printed 3000 copies by electricity, using an electric motor, deriving current from a ten light dynamo 15 rods away. these march 14 editions were requested for the historic value as keepsakes and for collections in museums. it seems the steam power was temporarily stopped to the shop and this is when a man named weaver decided to run two electrical wires from a parker dynamo used for lighting the local armory over buildings and alleys into the newspaper office where a remington electric motor waited. the rest is history.

re: george washingtons death, i was wondering if anyone could shed light on a jan 1st 1800 massachusetts spy paper which of course is completely filled about the death black borders and all. i think the paper would be classed as second rate. i have had it for some time and really dont know if this paper ever reprinted papers or not. would app. any info. thanks. carl.