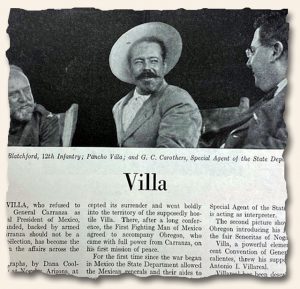 Recently, while in Cancun, Mexico I was struck by a small yet complicating life perceptive… one man’s villain may very well be another man’s hero. Here at Rare Newspapers, we see varying sides of news stories on a daily basis… from American Revolutionaries vs. the British perspective to The Confederate troops vs. The Union soldiers. This day, however, as I stood in the Mexican sun, talking history with a young man who was the age of my children, I realized there was a new paradigm I had not considered. As he questioned what I did back in the states, his eyes lit up as he asked if we had any issues covering Pancho Villa [1]. I quickly responded, “Oh, I’m sure we do. Let me check and I will get back to you.” Later as I scrolled through our inventory, I realized I would be hard pressed to find an issue that would excite him since the American perspective of this controversial figure was very different from my new Mexican friend’s view. I determined to find something to show him and finally settled on a rather benign Harper’s Weekly image without a splashy headline. He seemed pleased enough. My take away was a reminder to analyze my own heroes more carefully and to be sensitive to other people’s paradigms. There may only be one truth however, our paradigm can make it hard to distinguish at times.