What is the American Dream? We often hear that phrase bantered about but people seem to have differing views of just what it means. I was recently reading an article by a young woman in her early thirties with 2 small children. She and her husband had decided to move to Hawaii for a simpler life… a life not cluttered with as many things or as many stresses. Her final words on the subject were, “we chose to give up the American Dream”. WHAT !?! She had me until that final statement. Is it possible she could have grown up in this country and not actually know what the American Dream is !?! Could she have been deluded to believe the American Dream is about things and schedules and the size of your home? Ok … I’ve taken a breath and calmed down a bit. One of the blessings we have as students of American History is a foundational knowledge of what our Founders believed the American Dream was. Let me allow them to speak for themselves: 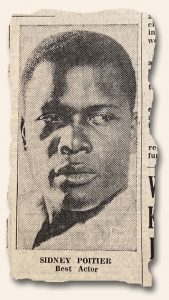 “We hold these truths to be self-evident, that all men are created equal, that they are endowed by their Creator with certain unalienable Rights, that among these are Life, Liberty and the pursuit of Happiness.”

The pursuit of Happiness … very different from guaranteed happiness. In many ways, the ability to pursue something is a far greater gift than it being given to you. There is often joy and a deep sense of accomplishment in the striving. Being handed something on a silver platter lacks the ability to give the same growth and satisfaction.

On April 14, 1964, The Leominster Enterprise [1] wrote a front page article covering the Academy Award [2] winners from the night before. One of these stars was Sidney Poitier, “who struggled from the poverty of a Caribbean tomato farm … Poitier, who was born in Florida, but who was raised on a tomato farm in Nassau, was unable to addend school until he was 11 years old. Two years later he was forced to help support his family. When he was 16 he moved to New York City with a series of odd jobs, including ditch digger, store clerk, pin-boy in a bowling alley and longshoreman. He finally joined the American Negro Theater and worked as a janitor in exchange for acting lessons. He advanced to small roles and moved on to stage parts…”.

Now there is the American Dream at work!

PS. That evening, Sidney Poitier became the 1st black man to win an Academy Award – all due to his PURSUIT of the American Dream.