Why do I collect rare/historic newspapers? How did I get started? In 2004, shortly after the Boston Red Sox won World Series, I received a January 7, 1920 copy of the New York Times as a gift from my wife. After not seeing any significant headlines in the paper, my wife 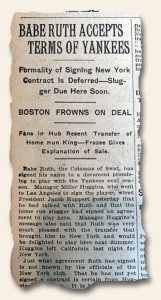 said, “Check out the sports page”. There on page 22 was the trade of Babe Ruth to the New York Yankees, the legendary “Curse of the Bambino”. This inspired my interest to assemble a collection that epitomizes what it meant to be a true Red Sox fan including the 1918 World Series victory (Christian Science Monitor dated September 12, 1918), the aforementioned sale the legendary slugger to the Yankees, the subsequent 86 years of agony including the ’46, ’67, ’75, and ’86 World Series defeats, and finally the breaking of “the curse” by beating the Yankees and Cardinals to win the World Series that I had just secured in my October 2004 copies of the Boston Globe.

During my efforts to find these papers at Rarenewspapers.com and on eBay, I found a 1791 copy of the Middlesex Gazette, Middletown, CT announcing that Vermont has become the 14th state of the union and the FIRST to enter under the terms of the new federal Constitution. My wife 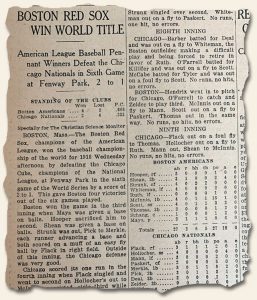 and I were married in Vermont (where her parents lived for 35 years and where her ancestry has been traced to one of Ethan Allen’s brothers and the “Green Mountain Boys”) so it was of some personal interest as well. For only $30, I thought this paper was amazing and my wife suggested that I try to collect papers announcing statehood for each of our 50 states. With the prospect of searching for another 49 papers seeming a bit overzealous, I decided instead to focus on finding papers announcing statehood of the original 13 colonies. 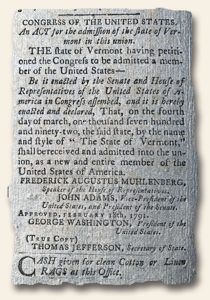 It took a couple of years to secure all these statehood ratification newspapers and in the process, I found a paper with Maine becoming a state in 1820. Although this was beyond the scope of my original search, I remembered that Maine’s statehood was a part of the Missouri Compromise. So certainly, I had to search for a Missouri statehood paper! This was what is equivalent to today’s Google searches are on so many levels … one piece of history leads to another to another to another! And with this, my affinity for newspaper collecting had begun.

At the same time, by reading books such as David McCullough’s “1776 “and “John Adams”, “The Founding Brothers” by Joseph Ellis, and James Madison’s notes on the Constitutional Convention, my interest in U.S. history was further awakened and my interest began to shift to 18th and 19th century papers. These papers provide primary source documentation described in rich and colorful language that is not experienced in academic settings. As my appreciation of the hobby grew, I began to assemble groups of papers that are linked together by a particular event or series of events that “tell the story” in real time by those who were living at the time. It is with this mindset and approach that I have continued to be an avid collector to this day.