I am the published author of over a dozen books of fiction and nonfiction. A few years ago, my publisher suggested that I write a book about Kathryn Kelly, the wife of “Machine Gun” Kelly and also the “brains” behind the crimes they committed over several years. What little I could find about K 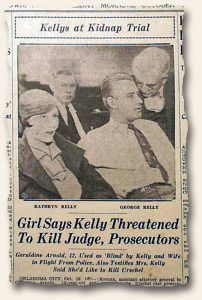 athryn was interesting, but since no other books had ever been written about her, research was difficult. I turned to the FBI Vault of historical documents and personally interviewed people who lived during the Great Depression and the “Gangsta” Era. And then I came across “Timothy Hughes: Rare & Early Newspapers.” It was like finding a gold mine. I was able to access the newspapers from that time period that followed the crimes and eventual arrest of Kathryn Kelly and Machine Gun Kelly. With this information, along with the other research I had gathered, I wrote the book, Kathryn Kelly: The Moll behind Machine Gun Kelly. It was recently optioned for a major film. The newspaper I have saved for my collection is “The Bethlehem Globe-Times” – Tuesday, September 26, 1933. On the front page is the headline: “Machine Gun” George Kelly Is Captured. The sub-headline reads: Desperado Surrenders Without Resistance – Wife Is Also Taken Into Custody.