Many people who have faced difficult challenges in their personal lives become, in turn, sensitive to the struggles of others.  It might be a similar difficulty, but it isn’t always.  In the history of discrimination, a less-than-equal status has been designated to individuals or groups for reasons of socioeconomic status, color of skin, or gender.  Specific 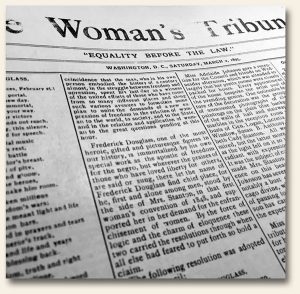 publications sprang up to give a voice to the unrepresented, and, at the very least, the power of the pen documented the demand to be heard.  Within the newspapers of early America are the abolitionist papers and the working men’s papers and the women’s papers.  The writers and editors called for equal status under the law, the right to own property (starting with the freedom of an individual over his or her own life) and the right to vote.

It’s this last one that has me looking intently at the front page of The Woman’s Tribune from March 2, 1895.  In the first place, I noticed that the paper is much better quality than, say, the New York Times from this era.  It seems the publishing board of this newspaper did not make the downgrade from rag paper.  But mostly I noticed that the masthead “EQUALITY BEFORE THE LAW” is followed by the column heading “Frederick Douglass [1]“.  There is a poem written by Mary Lowe Dicks in honor of the great abolitionist, followed by a tribute/obituary that fills two columns delineating his impact for the cause of freedom.  The ending portion is particularly poignant:

In him the hopes of his race were realized; in him humanity was dignified.  The world is poorer because he is gone; humanity is richer because he came.  The legacy of his life and service attests the truth that God keepeth watch above His own, that He shall turn and overturn until injustice dies and the right eternally triumphs.

I like this honoring of another who had a different set of obstacles to overcome, but was admired for the battle he fought and the way he waged it.  I picture the huddled masses of abolitionists, suffragists, laborers — not pitted against one another, but rooting for the common goal of “liberty and justice for all.”