An informed, intentional approach to diet is good for me.  Left to pursue my preferences mindlessly, I might subsist on kettle cooked potato chips, with an occasional pickle or a chocolate chip cookie.  Each of those has its worthy place within a more comprehensive whole, as does the literature one reads. 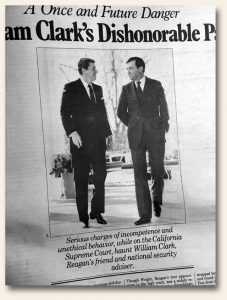 But variety is helpful — even to more thoughtfully discern likes and dislikes.

I turned from the early 1800’s to one of the most modern titles in our annals, The Village Voice [1].  While the writing style is decidedly different, I was surprised to find enough similarities that I could discern the fingerprints of its antecedents in a random sampling of this publication from the 1980’s.  Comparably, advertisements seem to take up close to one-fourth of the print space, although the subject matter differs widely.  This Greenwich Village title has the expected  focus on performing arts.  Some of the movie names were familiar to me, as were a few of the bands who advertised upcoming events.  It seems the Twilight Zone movie was not considered by Voice reviewers to be a cinematic success, despite the critical acclamation of its television forerunner.  Cinema listings included Superman III, Return of the Jedi and The Survivors.

Distinctly anti-establishment in tone, the editorials tackle a range of hot topics, including the Catholic Church, West Bank occupation and the negative reaction to the musical movement of “serialism”.  The writing is organized and thoughtful, exhibiting skill and professionalism.  Most surprising to me is the piece by an investigative journalist whose three page report questions the qualifications of Reagan appointee William Clark.

Somehow, I hadn’t anticipated an intellectual discussion from The Village Voice [1], but having spent the time digging through, I am pleased to be proven wrong.