While working on a different topic, I came across a derogatory reference to California gold, which started me thinking of how little I know concerning that period in American history.  I was born into the Information Age so there is no reason for me to remain in ignorance; the world wide web is packed with timelines and maps and diary excerpts.  Since I work in a place that houses many original pieces concerning every era since the first colonists arrived, I decided to begin my research on the Rare Newspapers site. 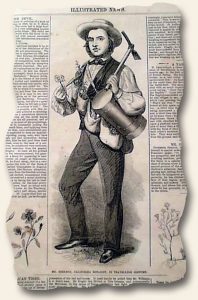 By merely typing “Gold Rush [1]” in the search bar, I accessed 122 titles.  As an experiment I only used the items and listing descriptions to obtain an overall working knowledge, and for entertainment purposes I thought it might be interesting to summarize my findings.

Modifying my results to an issue date sort, and beginning with the oldest first, I found the following attached to a paper dated September 28, 1848 [2]:

Page 3 has a lengthy article: “The Gold Region of California” which is from the very early period of the Gold Rush. It is mostly taken up with two letters from the gold fields, introduced with: “It would seem from late accounts that California is afflicted with some rich gold mines. The people there have been seized with madness on the subject & are abandoning the ordinary pursuits of life for the sake of hunting gold…”

Listings for publications from October, November and December of that year bear similar accounts and tell of the growing numbers of those involved.  By January of 1849 the tone becomes cautionary:

Page 2 has: “California” which warns those thinking of heading to the gold fields to be very careful: “…large number of persons making preparations to proceed to El Dorado…will be obliged to undergo much suffering before reaching their wished-for haven & many will perhaps die on the passage…” with more. Also a short bit: “Death at the Gold Regions”.

Reading through all the write-ups I felt a bit more sure of my historical bearings when I encountered a familiar name that was not in this instance attached to a favorite brand of coffee (Pike’s Peak [3]).

It seems I have barely scratched the surface…