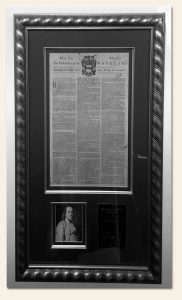 Two things jumped out at me recently, and perhaps I recollect both since this week is a planned combination post.  Also, in a strange way, they are related to one another.

First of all, anyone who has visited our facility has probably been struck by the magnitude of material that is literally everywhere, and the evident esteem in which all of these papers are held.  At my desk (which faces a window) I am flanked by two framed issues.  To my right, a Cleveland paper pronounces the Pirates the World Series [1] Champions of 1925.  And the headline hung on my left shouts, “ALLIES PROCLAIM VICTORY IN EUROPE.”  There are nine similarly matted and mounted newspapers in this area that holds a couple of desks, four tables, and seven bookshelves — in addition to nine well-stocked shelving racks.  I am drawn to observe again this strange blend of work and wonder.  This is a business, after all, but it is also a repository of beauty.  The staggering volume of issues does not detract from the appreciation of each distinct title and headline (or buried mention).

A different interesting aspect of this Rare & Early Newspapers [2] environment, is the way it has shifted personal perspective.  Most people hear of a grounded ship moving after one hundred years, and wonder, comment or possibly exclaim.  Here, however, it is a call to research.  “I wonder if we have a report from that incident of Niagara Falls [3]’ history?”  Even random queries are seldom abandoned before at least a cursory glance at either database or archives.  Anniversaries turn into memos to check for same city coverage.  “Do we have a first report?”  And when research brings new facts or figures or labels to old history, the same material is scoured for people or places that used to be commonplace.  A purported  Alexander Hamilton [4] pen name, or the mention of a ship traveling the Erie Canal, or DNA testing for a relationship between a slave and an American President – all can bring a new way to look at old news.

And here, carefully kept among millions of issues, it is likely we have it.