Newspapers were bound into volumes [1] throughout the years for a variety of reasons.  My favorite is that the owner of a large house would send off the papers that had been delivered, ironed, and read throughout the course of a year.  A book binder would glue and sew them together, and they would be returned to the home’s library, to be 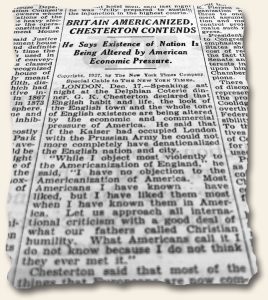 arranged with all the other years, and thus mark the history within which great homes and great families were housed.

Breaking a volume of bound issues goes against the grain for someone like me.  Perhaps the remembered library hush of early childhood imprinted an aura of solemnity to the world of books; perhaps the shadowed mystery of pre-reading years conjures the aroma that is akin to sacred things.  The most likely reason, however, is reflected in the lifetime acquisitions boxed in spare spaces, despite overflowing shelves in every room.  I like books.  And my forays into the back are exercises in willpower if I am headed toward All the Year Round [2], Household Words [3], Atlantic Monthly [4], Harper’s Weekly [5]or Scribner’s Monthly [6] – which are liberally laden with serialized stories from beloved authors.

This week, in a search for details surrounding a Harlem rabble-rouser, I found an article headed “BRITAIN AMERICANIZED, CHESTERTON CONTENDS” [7], followed by, “He says Existence of Nation Is Being Altered by American Economic Pressure”.  The opening words confirmed my hope that these were indeed opinions offered by the great writer of The Man Who Would Be Thursday, the Father Brown Mysteries, and seventy other titles.  Many American readers, such as myself, have relished the literary works of this sharp-witted, kind-hearted lay cleric of the early 1900’s.

The affection, it seems, was not mutual.

“Speaking last night at the Delphian Coterie dinner, G.K. Chesterton declared that English habit and life, the look of the English town and the whole tone of English existence are being altered by the economic and commercial pressure of America.  He said that if the Kaiser had occupied London with the Prussian Army he could not more completely have denationalized the English nation and city.  ’While I object most violently to the Americanization of England,’ he said, “I have no objection to the Americanization of America.  Most Americans I have known I have liked, but I have like them most when I have known them in America.  Let us approach all international criticism with a good deal of what our fathers called Christian humility.  What Americans call it I do not know because I do not think they ever met it.’”

And, with that, I have nothing more to say.

First let me start by saying 31 weeks….is an extremely long time, but if attached to the person or item the love is as strong today as 31wks ago. I must agree with u that we should not attempt to americanize england….the nostalgic feeling brought on by just the thought should not be altered. FAAD and goodnight