Last week I didn’t post because I was involved in a local amateur production of Disney’s [1] Beauty and the Beast.  Consequently, I returned to work with many dramatic musical numbers dictating the soundtrack of my mind.  Perhaps that influenced my interest in an assigned hunt for a title that reported on the death of the “Leather Man” in 1839.

I found it, and duly replied back to the collector.  But I also took a little bit of a break to search out the meager story of this individual who was a vagabond for 32 years of his life.  The inscription on his tombstone describes a man, “who regularly walked a 365-mile route through 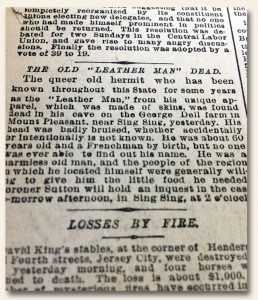 Westchester and Connecticut from the Connecticut River to the Hudson living in caves in the years 1858–1889.”  Like clockwork, apparently, he completed his circuit every year and was greeted and given hospitality by many along the way who would normally reject any other vagrant.  The internet provides an intriguing image of this leather patchworked fellow in his exile from the rhythms of normal life.

And, with the tortured song of the male lead sounding in my head, I wondered at the days preceding his arrival; what made him the man who came to be known this way?

Was he tormented and driven to trudge through the days, or was this a happy occupation for a human being – leaving behind the established cares of civilized life, content to cover so much ground in so many hours for the prescribed revolutions of the sun?  Either way, or something in-between, he made it to the second page of The New York Times [2].  For all the documentation housed here, how many millions of unread or even untold stories must there be?

Anyway, I am back at work, tracking down first, second and third day accounts of the original murder that inspired Capote’s “In Cold Blood”  [3] and pulling the obituary for a man who had no known name or history of origin.  Next week I am determined to look at these territory papers that are so desirable, and maybe delve into the popular Gentleman’s Magazines with their coveted battle maps [4].

All of which remind me of one theory concerning the Leather Man: that he was an ex-French soldier.  Perhaps that’s true, and all the years of marching over fields and sleeping rough became a way of life he ultimately could not break.  Whatever compelled him, day after day, I’m fairly certain a tragic musical score is appropriate.