Since my entries are personal perspective, and this is a significant week in the Christian calendar, my post carries a tinge of my own religious convictions.  Please skip reading if such things offend you.  After today I’ll endeavor to quash my worldview until a similar time next year… 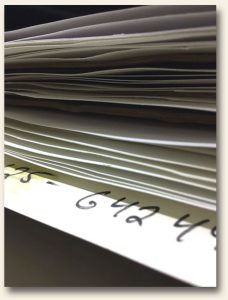 There are newspapers inventoried in this facility that are so old they preceded the term, and are referred to by those in the know as a newsbook or a “coronto”.  At least, that is my sketchy understanding.  This week I am thinking about things that have survived generations, inventions, wars and cosmic changes.  The listing that caught my eye was a title from 1629, banned in 1632 –but then given special license to continue six years later.  Wikipedia says, “In 1638 they were granted a patent from King Charles I for the publication of news and history, in return for a £10 annual donation toward the upkeep of St. Paul’s Cathedral…”  And, of course, I wanted to see this for myself.  The small volume sold in 2015, just days after it was made available, but I was able to find a German newsbook [1] from 1607 that I could look at. It wasn’t in a vault, but neatly cataloged and filed with all the other items in the seventeenth century inventory [2].  There are so many treasures, I suppose a vault would have to be the size of a warehouse — which indeed it is.  AUSSFUHRLICHER BERICHT [3] was accessible, and I was able to pull the folder, open it on a surface, and even lift the clear archival cover [4] in order to take a photograph without the obstruction of a reflected glare.  Not many people have the privilege of holding a publication that is over four hundred years old, and I know myself to be ridiculously undeserving. 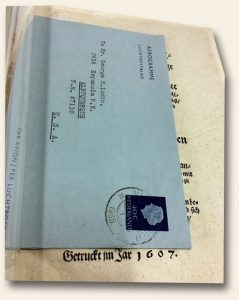 But this week Paris has superimposed itself on my mental wanderings.  As for much of the western world, images of flames engulfing an icon that has stood for eight hundred years are incomprehensible.  At a certain point old things seem to become everlasting.  Particularly, stone cathedrals are expected to survive history itself.  Invasion, famine, revolution and disease have moved around that block work for nearly a millennium.  But we have records here at History’s Newsstand of many seemingly immovable things that have eventually yielded, and those accounts are interspersed with all the common themes of humanity that seem unhampered by the passage of time.

This is the week that Notre Dame burned.  It is also the week before Easter — the darkness and mourning of “Good Friday” so closely  followed by the joyful resurrection of Easter Sunday.

There is destruction and devastation, but there is also redemption.  It’s the common cycle of the accounts told within these pages of history that are so neatly sorted, labeled, and shelved for retrieval.   Obituaries [5] and birth announcements.  Demolitions and groundbreakings.  Political structures that rise and fall, and new ones that rise again.

“A time to every purpose under heaven.”