Question: What do you get when you cross The Chicago Tribune with “The Crime of the Century”?

The Chicago Tribune, self-described as “The World’s Greatest Newspaper,” earned a reputation for having dramatic, timely headlines [1]. In this regards, they are perhaps 2nd to none. However, they are also well-known for what may very well be the greatest mistake in front-page headline news: “DEWEY DEFEATS TRUMAN.” [2] While certainly the most recognized, it was not the Chicago Tribune’s 1st major faux pa. Approximately 16 years earlier, in an effort to be at the forefront of breaking news in regards to “The Crime of the Century,” they printed the dramatic headline: “REPORT ‘LINDY BABY HOME’.” [3] Sadly this would prove to be a false, unsubstantiated report (aka, “fake news”) – as the Lindbergh baby would be found dead a little more than a month later. It sure goes to show how even the “best of the best” can make mistakes – a good lesson in humility for all of us. 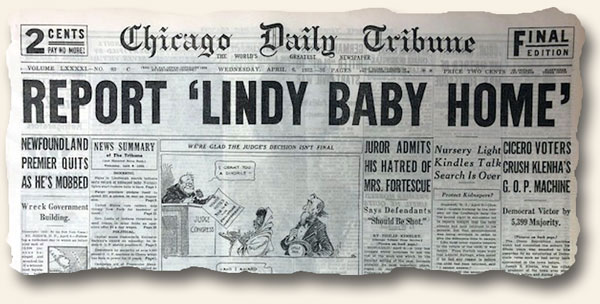